Home >> Happiness  >> 9 ways to handle difficult conversations in a relationship

9 ways to handle difficult conversations in a relationship

“We need to talk,” can be the four most dreaded words in a relationship. These are the kind of conversations that you feel are best avoided because they often lead to heated arguments. You feel stuck and stressed, as you wonder that ‘the talk’ will unwittingly end on a bad note. You still remember how exhausting it was the last time. Hence, to avoid arguments, misunderstandings, raised voices, and erupting emotions, you end up not having the conversation at all.

Bottling up your emotions, however, or sweeping issues under the carpet is not the solution. It only makes things worse. When a conversation is on the verge of an explosion, it is important to deal with it in a mature way. In his study, University of Texas psychologist Ted Huston observes that one of the major reasons that lead to a dysfunctional relationship is the distress that builds up because couples don’t know how to cope with arguments, and instead of resolving their problems, they withdraw, become defensive and vicious towards each other.

Never begin a conversation with an accusation. In order to build mutual trust and have an effective conversation rather than a confrontational one, it is important to have a calmer approach. This will not only lead to a positive outcome but also provide an amicable platform for both partners to put forth their grievances. An accusation can kill a conversation, or lead to a full-blown argument. Psychologist John Gottman suggests using a soft start-up to a crucial conversation to prevent major arguments by presenting differences and problems gently and without blame. His research reveals that a conversation that starts with harsh words and accusations tends to end with as much tension as it began with, if not more.

Put aside your ego

Before you sit down to talk, tell yourself that the goal of the conversation is not to prove who is right or who is wrong. Keep your mind open to differences of opinion. This is not a battle that needs to be won. What should matter is that both of you are cooperating and working together to improve things. When you understand the significance of this, the ego vanishes on its own. Apologising does not mean that you are wrong, it just means that you value your relationship more than your ego. It’s difficult to find a healthy medium when you let your ego take charge.

In the heat of a discussion, you may at times throw your partner off with your opinion or accusations. In such cases, give them the time to think, evaluate, and respond, and stop yourself from interrupting your partner mid-conversation. Don’t be in a hurry to jump to your own conclusions without giving your partner the chance to talk and put forth his views and opinions. In order to have a balanced conversation, it is crucial for you to be open and not have a pre-determined outcome in your mind.

Be a good listener

While having a difficult conversation, listen to your partner to understand their thought process and point of view. In the midst of a conflict, you may find yourself waiting for the other person to stop talking just so you can respond. Control the urge to counter-respond. Listen to understand, not to volley back with an answer. Give yourself as well as your partner the time to introspect, instead of arguing. Hear your partner out in order to make them feel listened to and understood. 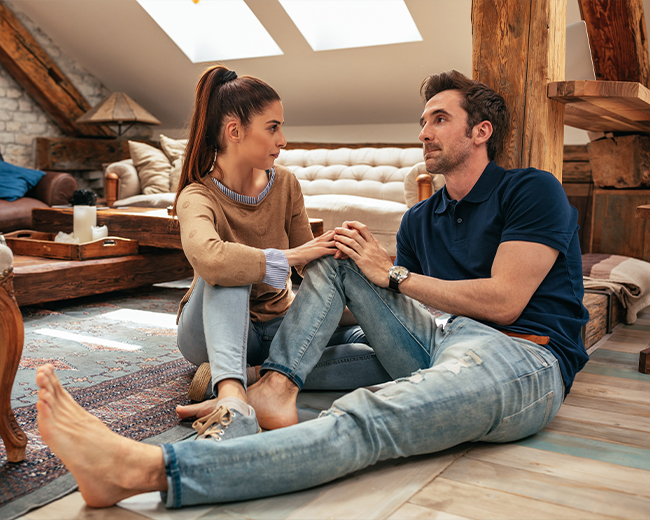 Control the urge to counter-respond. Listen to understand, not to volley back with an answer.

To maintain a healthy relationship, it is imperative to be empathetic towards each other. The key is to communicate rather than confront, and calmly discuss the problem with your partner without hurting their feelings or attacking them. If you are empathetic, your partner will make the effort to understand you and express instead of taking it as a personal attack. If you soften your conversation and remain positive, then the outcome will be constructive too.

When you are upset or angry, stop yourself from digressing from the issue at hand. A lot of times in the heat of the moment, emotionally-laden conversations tend to steer away from the actual matter, thereby complicating the problem rather than solving it. If you are talking about a particular instance, don’t throw in examples or issues from the past. Stick to the discussion at hand rather than digging up the past to avoid a full-blown argument.

When tempers fly, logical reasoning goes for a toss. Discussions turn into heated arguments, accusations are hurled, and feelings get hurt. In such situations, it is easy to lose control of your emotions and take a hasty decision that could ultimately lead to irreparable damage in your relationship. During times like these, remember the value of your partner and your relationship. Don’t lose sight of the ultimate goal that is to resolve the issues, reconcile, and move on.

Focus on the solution, not the problem

Before preparing to have ‘the talk’, ask yourself, “Am I looking for a solution to resolve the issue, or am I willing to leave it unfinished and broken?” The way you express yourself can reveal a lot about your intentions. Being solution-focused will help you remain composed and let you be in a better place to deal with your problem, whereas when you only stress on the problem, you are prolonging the conflict.

Forgive and move on

No matter how much your partner loves you, conflicts and arguments are bound to happen, even if unintentionally. But it shouldn’t be the end of a relationship. Moreover, if you are hurt, keeping your feelings hidden can make you resentful, without you even realising it. So talk and talk for your own peace of mind. If the value of your relationship is bigger than the argument, then bury the hatchet and move on. Having the ability to forgive and let go is one of the most important tools to maintain a healthy and loving relationship.

We all go through adversities at one point or the other. No matter how strong or optimistic we are, we fall prey to times when...Read More

How to live life with no...

Often, you come across situations in life where you tend to regret your past mistakes. You analyse where you went wrong and find ways to...Read More