Are you an early bird or a night owl?

Some people start their day at first light when many are still asleep. They are the proverbial early birds. Then there are those who prefer late hours to get creative and enhance their productivity. They call themselves the night owls. It’s safe to assume that we all wonder how people can wake up as early as 3 am or sleep as late as 3 am. It all comes down to your sleep pattern that determines the hours when your productivity and creative skills are at a peak.

Greats like Charles Darwin, Winston Churchill, and Elvis Presley were known to be night owls who did some of their best work at late hours. On the other hand, Richard Branson, Benjamin Franklin, and Howard Schultz are some of the famous names who thrive at the break of dawn. These people knew at what time of the day their productivity was at the highest.

The real question here is, can you choose your working or sleeping hours? According to a study on circadian rhythms, it’s your genes that decide whether you are a night owl or an early bird. That’s why for many, waking up early is as painful as sleeping late is for others.

In this article, we explore the pros and cons of being a night owl or an early bird, and how you can use your body clock to enhance your productivity. 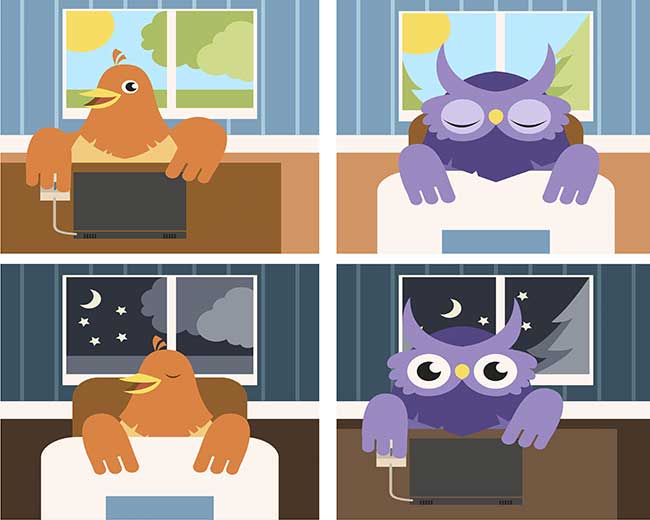 “Early to bed, early to rise, makes a man healthy wealthy and wise,” hints to the fact that being an early bird is the way to a healthy life. But you don’t have to be an early bird to be successful or wise.

Dr Phyllis C Zee—a neurology professor and director of the Sleep Disorders Center at Northwestern University Medical School—found that the sun rays, we absorb between 8 am and noon, are the most crucial for our physical health. So, naturally, when one is an early bird, they are physically healthier and have a high metabolism rate and high energy during the day. They are also less likely to have any kind of addiction.

Early birds are more confident, assertive, and have lower stress levels throughout the day. Due to their high energy levels, they are also less likely to procrastinate, which makes them more productive, decisive, clear-minded, and more organised. For these reasons, many of the top CEOs and business executives are early birds.

However, on the downside of waking up early, they become less attentive as the day passes by. By evening, they are almost out of gas. Not only their cognition but their physical strength also decreases as the sun moves westwards.

Night owls show a steady rise in physical strength as the day goes by. They are not just physically active during the night, they are generally more creative too. They are also inclined to perform better in analytical tests and memory tests when compared to early birds.

Night owls use the calm of the night to hone their skills and work on their crafts. They are more open to accepting challenges and taking risks. Unlike early birds, night owls spend less time sleeping and more time on their tasks. Not getting enough sleep, however, leaves them exhausted and mentally tired too. This is one aspect of being a night own that can lead to health issues such as obesity, mood swings, and memory loss.

The proverb, “Early to bed, early to rise, makes a man healthy wealthy and wise,” hints to the fact that being an early bird is the way to a healthy life. But you don’t have to be an early bird to be successful or wise. In fact, multiple studies have proven that night owls have their fair share of creative abilities, which when put to right use can make them equally successful, if not more.

In the end, it depends on you. Whether you are an early bird or a night owl, your success and happiness depend on your actions and perseverance. So does your health. In any case, you shouldn’t compromise your sleep over anything, for wellbeing is the most important ingredient for a happy and peaceful life.

How to live life with no...

Often, you come across situations in life where you tend to regret your past mistakes. You analyse where you went wrong and find ways to...Read More

Work from home: The new normal

The world is changing, and the ‘new normal’ is taking over. In this new world, wearing face masks is mandatory, washing hands is a necessity,...Read More