Home >> Happiness  >> Speaking the language of our body

Speaking the language of our body

Body language—or kinesics as many anthropologists call it—is a language of confidence and self-assurance. Isn’t it quite fascinating that your body language reveals to the world perhaps more than what you intend to disclose? In his book Silent Messages, Professor Albert Mehrabian reveals that 55 percent of communication takes place through body language. It means people pay more attention to our posture and gestures than the words you speak.

Your stance, posture, gestures, and gaze can reveal whether you are a leader, a follower or an average Joe. We only get one chance to leave a lasting impression; why then should we not make the best use of perfecting the body language? In this feature, Soulveda lists different postures and gestures that can reveal the real you to the world, even before you speak a word.

Assuming the posture of a leader

Imagine, sitting at a job interview or at a meeting with an investor slouched, with crossed arms, crossed legs, and locked ankles. Your presentation is flawless and you’ve answered all of the questions without a stutter. Yet, the interviewer seems unimpressed and the investor just checked his wristwatch the third time. Why? Your body language or in this case a ‘closed’ posture is speaking to them, louder than your words.

A closed posture is a marker of low confidence, nervousness, and uncertainty. A listener with crossed arms displays an air of indifference and disapproval. When a speaker adopts the same posture, it shows that they are unsure. Leaning backward with crossed legs while seating on the chair is considered aggressive. It’s as though one is yelling and throwing offensive remarks without saying a word. A slouch is the biggest red flag in the vocabulary of body language; it screams of one’s timidity, insecurity and lack of authority and makes you look unattractive and frightened.

An open body is the posture of a leader—a sign of power, dominance, and control. Whether you are standing or seated, an open body exudes confidence. For an open body posture, keep your spine straight, spread your knees and feet till your shoulders’ width, and keep your arms beside your thighs. It is a power-posture that CEOs, presidents and several people who demand authority and respect assume. 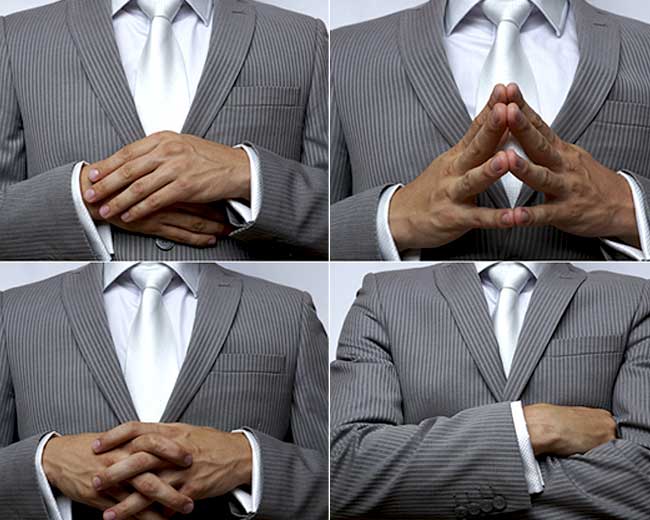 An open body is the posture of a leader—a marker of power, dominance, and control.

Winning through gestures and expressions

Imagine saying “nice to meet you” to someone with a dead look on the face. Chances are that you will receive a cold nod or a wry look in return. Why? Because even though your words expressed “pleasure” your body language yelled, “not interested”. Now repeat the same phrase with a smile and a slight hand gesture. Chances are that the person will respond with the same warmth and politeness because your words and body language expressed gratification.

Hand gestures are as important as a smile when one wants to express affection. But in what direction should your palms point—upward or downward? Palms in the upward direction communicate positivity—satisfaction, cooperation, honesty, and sincerity. So, if you wish to build trust or show gratitude to your family and friends, keep your arms open and palms up—not too far from your chest. On the contrary, if you wish to establish authority or communicate “let me do the talking” or “shut up and listen to me”, point your palms downward.

Once you know how to use your hands, it is time to focus on the head. Everyone nods during a conversation. It communicates encouragement and empathy. For instance, when a professor nods at a student’s question, it shows that the professor appreciates the student’s inquisitiveness and it also stresses upon the professor’s intent and attentiveness. One thing to watch out for is excessive nodding that could make you seem like an imposter. 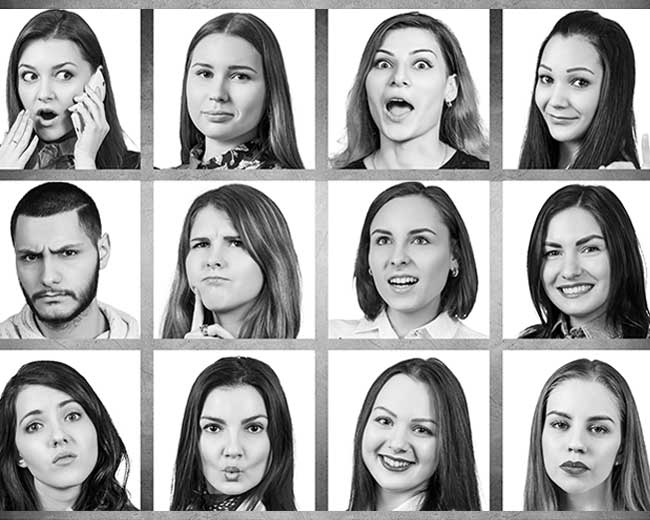 Eyes can easily convey our thoughts and feelings, which makes it an integral part of our interactions

Taking the cues from the eyes

Eyes are indeed the windows to your soul. Few gestures express emotions such as joy and sorrow as strongly as the eyes. The way one looks at you, for how long they hold their gaze, whether they steal glances or completely avoid looking into your eyes reveals a shade of their personality. Eyes can easily convey your thoughts and feelings, which makes it an integral part of your interactions, formal and informal alike. Actors, for instance, like Joaquin Phoenix or Jodie Foster, evoke all kinds of emotions, just by using their eyes. Like them, you communicate through your eyes daily too. The difference is you are unaware of what your eyes might be saying.

Research shows that blinking incessantly is a sign of nervousness and stress. When anxiety hits, eyes flutter more than usual. Wandering of the eyes in any social setting, such as looking down or rolling the eyes up, underlines a lack of confidence, guilt or boredom. Holding gaze with the speaker reflects your fondness and respect. Prolonged eye contact, however, can make a person uncomfortable as well. The right balance is what one needs to find.

The lessons we learn during childhood shape us into who we become. They remain at the very core of our being, becoming the ‘window’ through...Read More

How to be a better listener:...

“One of the most sincere forms of respect is actually listening to what another has to say.” – Bryant McGill. Many of us might consider...Read More