Even though child abuse is one of the most condemned acts, it doesn’t cease to occur. It’s unfortunate and concerning that despite the protective watch of parents, law enforcement agencies, and several children’s welfare initiatives, child abuse is still common. Often, abuse is seen as taboo. Parents refrain from talking to their children about such sensitive subjects, and children are overpowered by fear or a sense of wrongdoing.

Addressing both parts, Aao Baat Karein bridges the gap between parents and children to keep child abuse at bay. Since the beginning, this social initiative has helped many parents rise above the taboo and openly talk to their children about abuse to keep them safe. Aao Baat Karein also empowers children by educating them on sensitive issues and teaching them how to save themselves from any illicit sexual encounters.

In an exclusive conversation with Deepti Mirani of ‘Aao Baat Karein’, an initiative for children’s welfare, we try to answer the all-important question: How to have ‘the talk’ with your child?

Tell us about Aao Baat Karein?

An initiative started by the NGO Parwarish, Aao Baat Karein works extensively towards the welfare and safety of children with educational workshops on mental health, sexual abuse, and substance abuse. Aao Baat Karein first saw the light of day in 2018 and has held workshops in over 40 Indian cities, touching the lives of over 1,50,000 students. It’s a platform where parents and teachers learn how to talk to children about sensitive topics such as sexual abuse, while the younger ones are taught about the difference between right and wrong, and why they shouldn’t hesitate in reaching out to their parents or teachers for anything. 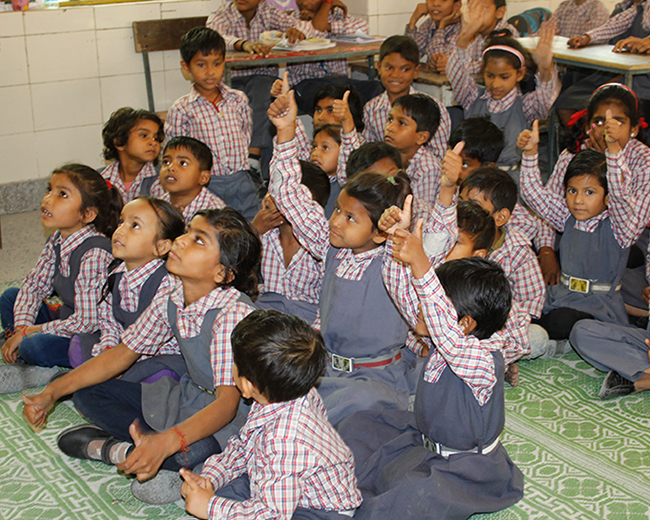 A few schools and parents understand the importance of the initiative, but the majority remains apprehensive and shies-away.

The concept of educating a child on good touch and bad touch is relatively new. What was the initial response? What kind of resistance did you face while interacting with children and parents?

The initial resistance is always high, even in this age and time. A few schools and parents understand the importance of the initiative, but the majority remains apprehensive and shies-away. There are also those who fear that talking about sensitive topics can corrupt their children’s minds.

As per the Government guidelines, all schools have to hold at least one compulsory session on sex education which makes approaching them easier. We organise two separate sessions, a 90-minute class for the children, and a 180-minute class for the parents. However, conducting sessions for parents is tricky. With them, almost half of the time goes into establishing the importance of having a conversation with their child on the topics of sex and abuse, breaking its taboo status in their minds.

Can you walk us through a routine session of Aao Baat Karein?

In schools, Aao Baat Karein sessions are held for students of classes 3rd to 10th. Each age group is addressed differently. In our classes, we first create a comfortable environment for the students. Then we address their preconceived opinions.

Influenced by TV, children assume only girls are subjected to abuse, and abusers are easily identifiable. We help them understand what abuse is, how it can happen to anyone, what to do in such a scenario, and how best to identify and avoid it.

We educate them about the different types of abuse. We also establish the idea of good touch, bad touch, and unsafe touch—a bad touch creates a sense of discomfort, but an unsafe touch is targeted at the private parts.

In the next step, we teach them what to do in dreadful situations—yelling, saying NO repeatedly, running away from the person or place, approaching a safe person. We yell and shout with the children to encourage them to feel the power in their voices.

In our interactive sessions, we also ask each child to identify a “safe person”, someone they can run to for help or simply talk. A safe person can be anyone they trust and feel safe around—a family member, a teacher, or a policeman in a public place.

How does Aao Baat Karein motivate children to talk about an abusive experience? What role do parents play in all this?

Like most adults, children too fall for victim-blaming—assuming the one who is abused is somehow at fault. Ridding them of this misconception is important. Mostly, abusers use guilt as a weapon, inciting fear. We explain that it is never the victim’s fault, no matter what the perpetrator says. We establish that what happened to them is wrong but it doesn’t have to change them or cause permanent damage. We inform them that they can freely talk about the abuse and it won’t make them look weak or invite negative attention. We try our best to encourage them to never suffer in silence.

Once the child has informed their safe person about an incident, it is the safe person’s (usually parents) duty to take action. We train the parents to neither ignore, nor brush off the incident. They must take immediate action, even if it is against a relative or a friend. We explain the legal repercussions of not filing a complaint against the abuse and also the emotional damage a child can suffer because of the negligence.

Parents are the biggest support system of their children. Why do you think there is a need for an initiative like Aao Baat Karein?

Most adults shy away from discussing the topics of sex and abuse. When a parent offers a fictional and incorrect answer on any sex or abuse related topic, the child retains it as a fact. Later, realising their parents lied, they choose to not discuss such matters again, expecting another incorrect explanation. Aao Baat Karein is bridging this gap—encouraging parents to create a safe and open environment for children to freely discuss and express curiosity about their bodies.

To feel embarrassed, laugh, or give an indirect response discourages children from opening up again. Parents should encourage questions and steer clear of all judgments. A piece of advice we give to parents is to treat the child’s curiosity like science, where every question has to be answered with facts and reasons.

After their session, most parents agree to discuss the subject of sexual abuse and puberty with their child. Aao Baat Karein also encourages mothers to talk to their sons and fathers to their daughters. This essentially creates an environment for the child where they can reach out to either parent with questions or for help.

Every 15 minutes, one child is sexually abused in India and almost 94.8 percent of child sexual abuse victims know their perpetrators.

At what age do you suggest parents should communicate with their children on a topic like sexual abuse?

Parents need to start as early as possible—when the child is about two and a half years of age. Children between two to seven years should be informed about personal hygiene, good touch, bad touch, unsafe touch, and also who they should reach out in the case of abuse. Children should learn how to raise their voice against any wrongs.

With children aged between eight and eleven, parents should talk about the concepts of puberty and hormonal changes. And when they turn 12, parents should begin discussing safe sex, STDs, and reproduction.

What are the red flags of abuse parents should look out for?

There are a few physical and behavioural indications and signs that can help parents and teachers identify possible abuse in children.

If a child has suddenly started performing poorly in academics, showing low self-esteem, avoids social interaction, or refuses to visit a particular friend or relative’s house, all these could indicate abuse. In addition, addiction to pornography, touching themselves inappropriately, eagerness to divulge in sexual content and sexual behaviour could also be warning signs parents should look out for.

Some children show signs of anxiety, depression, or bruises. They get frequent nightmares and even wet the bed. Parents need to be observant of their child’s behaviour at all times. If they spot any of these signs they should talk to the child to determine if abuse has occurred or if other issues are causing the distress.

What message do you have for parents?

Every 15 minutes, one child is sexually abused in India and almost 94.8 percent of child sexual abuse victims know their perpetrators.

Child sexual abuse is common and we must save our children from facing this traumatic experience. It should not be a taboo in your household, rather, it should be discussed openly. Create a healthy environment for children so that they feel safe and confident to share everything with you. Start today. It is never too late. You can find a lot of healthy material online on how you can start a conversation with your child, or you can refer to specialists or attend workshops like Aao Baat Karein.

Most pop­u­lar in Conversations

In conversation with Shubham...

Growing up, scoring good grades was our only mission. It’s a different thing most of us failed to get straight A’s that our parents wanted...Read More

Earth is home to around 8.7 million species. Their life, and the fate of the blue planet itself, now lies in the hands of the...Read More

If God exists, how does God look? There may never be an answer to this question, but if one had to guess, God must look...Read More