11 traits that make a good leader

If we had a superhero, a saviour of humanity with nerves of steel and laser-beam eyes, the world would have been a much better place. With superhuman powers at his disposal, we all could look up to that one person to solve our problems, and perhaps, fight an alien invasion too! Good thing we don’t have aliens raining from the sky or monsters running amok on our streets, but the need for heroes is still there, especially those who aren’t afraid of going beyond the call of duty.

In the real world, heroes are nothing but leaders. Their powers are their special traits, which good leaders use to make a difference to everyone’s lives. History books are filled with the stories of brave leaders, who rose against all odds to do what others couldn’t—taking hard decisions and making tough choices for the sake of others. As the author John C Maxwell puts it: “A leader is one who knows the way, goes the way, and shows the way.”

Ever wonder what makes an ordinary person an extraordinary leader? The same thing that turns a human into a superhuman—a handful of traits and virtues that are stronger than any powers. When you cultivate certain qualities, you turn into a leader, who can lead any army to victory, or any organisation to success. Unlike the fictional world, where there is a chosen one, anyone in the real world can become a leader. So, what are the traits that make a good leader? Let’s take a look:

It starts with confidence

Confidence is the biggest asset of a leader. If you have confidence in your abilities, you can climb any mountain in life. Another great aspect of confidence is that it’s contagious. If others in your environment lack confidence, they can derive it from yours. The legendary painter Vincent Van Gogh once said, “If you hear a voice within you say ‘you cannot paint,’ then by all means paint, and that voice will be silenced.” It is the power of confidence that can make any fear, obstacle, and setback look small.

Make honesty and integrity your strength

Leaders never lie and always keep their promises. True leadership is steeped in the virtues of honesty and integrity. A leader can consciously take the decision to do what is right, even if it is a difficult path to tread. A leader shouldn’t need an incentive to be honest. Bestselling author Mark Twain once remarked: “If you tell the truth you don’t have to remember anything.”

Leaders can inspire the hopeless

When all hope is lost, the ability to inspire can help a leader win a losing battle. The power to inspire others is one of the most powerful traits a leader can have but it isn’t easy to acquire. To learn how to inspire others, take a look back at history. The past shows that people like Martin Luther King, Mahatma Gandhi, Winston Churchill, and Abraham Lincoln did not just inspire people, but nations too. Why thousands of people chose to follow a single person, even if it meant going to prison or fighting a war? One word, belief. People believed in these leaders and in their vision. To inspire people, a good leader needs to win their trust; needs to know their problems; and has to have an inner voice that reflects conviction, plan, and action. 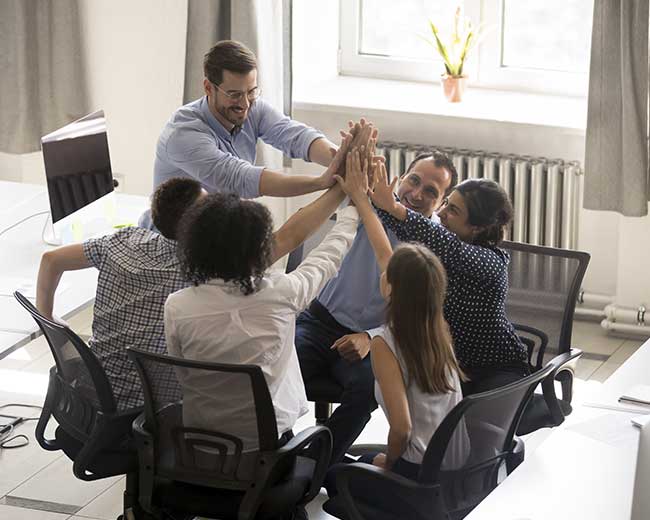 Teamwork will make a vision succeed

American businessman, Andrew Carnegie perhaps understood the importance of teamwork better than his peers. He said, “Teamwork is the ability to work together towards a common vision… It is the fuel that allows common people to attain uncommon results.” Carnegie said this more than 100 years ago, but the meaning of teamwork hasn’t changed till today. Teamwork is like a symphony. Imagine an orchestra where artistes using different instruments work together to produce a symphony. Every member has a predefined set of roles and responsibilities, and each of them follows the conductor who shapes the sound of the ensemble. A leader should work like a conductor as it is he who gives direction to a team. When people perform in unison and complement each other’s work, a symphony of success is produced.

Everyone is creative and innovative in essence. This being said, most of the people are unaware of their creative and innovative side. A leader enables such people realise their innate ability to think creatively and innovate to come up with brilliant ideas. How can you do this? Jony Ive, the man behind the designs of Apple products says, “The best ideas start as conversations.” Ideally, a leader can find their inner Jony Ive someday by encouraging brainstorming sessions that foster creativity and innovation. A leader’s goal should be to create an environment where people feel they have a voice and the freedom to share their ideas.

Alan Mulally, the former CEO of Ford Motor Company, saw creating a vision as the sole responsibility of every leader. He says, “It’s important to have a compelling vision and a comprehensive plan. Positive leadership—conveying the idea that there is always a way forward—is so important because that is what you are here for—to figure out how to move the organization forward.” A leader finds a way forward even when the future is uncertain. Having a roadmap is always important, but carving a path when there is none is the mark of  true leadership. Begin with deciding the destination the leadership wants to reach. It should be bold and beneficial. Once the goal is defined, leaders must share the purpose and expectations with everyone. If people see their growth in his/her vision, they will feel inspired to achieve it.

A leader can’t become great without having the skills of an orator, someone who not only talks to people but speaks to their aspirations and emotions as well. For a leader, words aren’t important, but whether those words can answer questions or show a way forward to the listeners, is vital. But this skill can’t be learned overnight. People spend days and nights mastering this ability, practising in front of a mirror, reading their speeches aloud before meetings and learning the nuances of body language. But before anything, a leader must try to understand the needs and challenges of the hour. If a leader can put himself in the shoes of an audience, they will not only listen but hear as well. 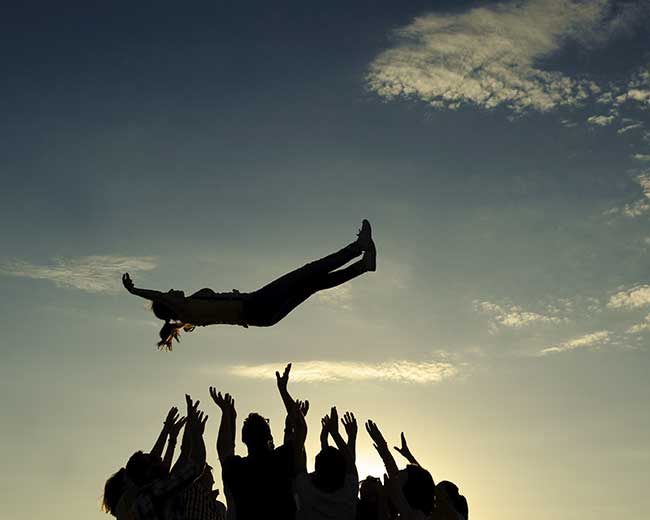 When a team grows, the responsibilities of a leader grow along with it. It is one of the most important and difficult transitions for a leader—the shift from managing 10 people to 100 people. But the test of a true leader comes when resources are less and demands are high. This is where the delegation of duty comes in handy. Delegation is the art of getting things done without getting involved excessively. To delegate, a leader keeps a plan ready, where everyone from the team fits as per their strengths.

This plan is the roadmap to reach the bigger goal, which can be achieved if each person is aware of their responsibilities and expectations. Since people can’t read minds, a leader has to communicate all the details carefully. Once the tasks are assigned, the next step for a leader is to empower his people. This is done by making time for personal interactions, listening to issues, offering solutions, and creating an environment where recognition and support are a common practice.

A leader takes decisions on a daily basis. Each decision has a result, and each result has a consequence. When the consequences are good, people’s belief in the leadership cements further. And if the decisions are bad, the team may start losing trust in the abilities of the leader. History doesn’t judge leaders on the basis of decisions they took, but whether those decisions contributed to a greater good.

Imagine, if Allies had lost the Battle of Normandy. D-Day would have become a stain on the leadership of Winston Churchill, Franklin D Roosevelt, Dwight D Eisenhower and many others involved in the planning. These Allied leaders knew the stakes were high but went ahead with their decision eventually marking the beginning of the end for Axis powers. It was a decision with a careful assessment of the situation. Every leader should know how to assess a situation—what choices they have and what decisions they can take. A good leader avoids making decisions based on whims and impulses.

Emotional intelligence, the centre of all traits

A mark of a wise person, emotional intelligence is the conspicuous trait that separates leaders from the rest. It is the art of being self-aware and mindful that leaders practice to keep their unwanted emotions and impulses at bay. There was a time when bosses used to yell “Jump!” and people were supposed to scream “How High!” It was the old tradition of doing business where leadership was more like a dictatorship. But those days are long gone. Today, a leader ‘jumps’ first, and the rest follow.

Emotional intelligence enables leaders to make decisions that benefit everyone. However, it becomes impossible to do so when personal feelings and mental noise affect your decisions. For a leader, rationality and emotions walk hand in hand—when used together, wise decisions and actions manifest. Another reason why emotional intelligence is imperative is because it supports all other traits of a leader. If you want to become a good leader who inspires, delegates, fosters creativity, and orates like Obama—build your emotional intelligence first.

You don’t need a title to be a leader

Leadership is not about a title but the desire to contribute and grow. Mark Sanborn, the author of You Don’t Need a Title to Be a Leader, believes skills and results make a leader. Titles, on the other hand, confirm leadership but never bestow it. This makes leadership a choice, which individuals take on willingly without waiting for others to tell them. The story of Fred L Turner is the sheer inspiration for countless people who start small but dream to go big. The former CEO of McDonald’s, Turner started his journey from a kitchen, where his job was to grill patties. No one ever told him to do anything extra, but he took ownership of his work anyway—ensuring quality food. This personal initiative earned him the title of VP of operations in just two years, and CEO in the next 15 years—McDonald’s expanded to 118 countries during this period. Turner’s rags-to-riches journey is proof of the fact that titles, growth, and success follow leadership, and not the other way round.

Life is uncertain. We all have heard this phrase at some point or other in our lives. But now is the first time many of...Read More

Every decade of your life brings new meaning to your father’s life. In your first 10 years, he is the superhero who slays the proverbial...Read More