More than a decade has flown by but the memories of our visit to Manali, soon after my board exams, are still fresh in my mind. Those lofty, snow-covered peaks, picturesque valleys, cascading waterfalls and lush green forests—everything about Himachal was magical, a complete tourist’s paradise. It felt like the alluring beauty and the magnificence of the scenic landscapes had cast a spell on me. We visited all the popular destinations—Shimla, Rohtang Pass, Spiti Valley, Kangra and others. But the one place that created lasting memories in mind that I’ll cherish all my life was the Hidimba Devi Temple in Manali. Also known as the Dhungiri temple, this magnificent shrine dedicated to Hidimba Devi, was built in 1553 CE by Maharaja Bahadur Singh. 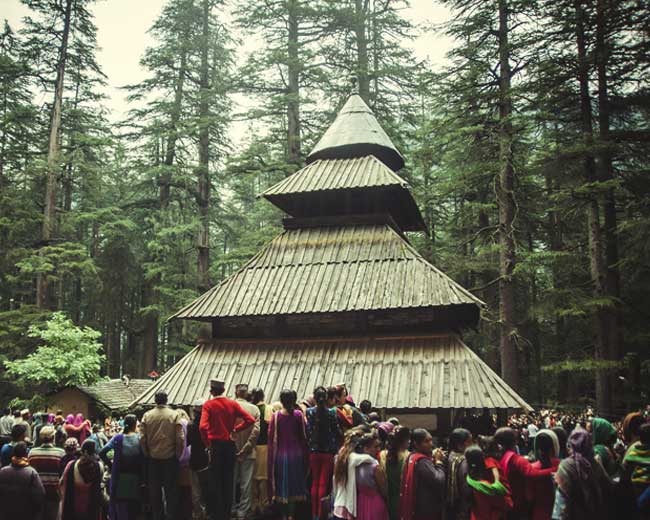 The Hidimba Devi Temple in Manali dedicated to the Demoness Hidimba

The story of Hidimba Devi takes us back to the days of Mahabharata. Born as a demoness or a raksashi, Hidimba was the sister of Hidimb, the powerful monster king of the Kamyaka forest. Legend has it that after the Pandavas escaped Duryodhana’s attempt to assassinate them, the five brothers headed straight to the Kamyaka forest, which was the home for the demon siblings. On learning that the  Pandavas were staying in the forest, Hidimb ordered his sister to kill the brothers. Hidimba then transformed herself into a beautiful woman to lure the Pandav brothers. But what happened next was something Hidimba never expected. She fell in love with the well-built, handsome Bhima at first sight. Instead of executing her brother’s plan, she went up to Bhima with a marriage proposal. Hidimba was so besotted with Bhima that she revealed her real identity and also cautioned him of the impending danger from Hidimb with utmost honesty. She, in fact, helped the Pandavas defeat her brother Hidimb in a battle. On Kunti’s approval, Bhima married Hidimba. However, Bhima had a condition—he would leave Hidimba once she gives birth to his child. A love-struck Hidimba agreed to it readily. A baby boy was born to the couple within a year and as agreed, Bhima and the other Pandava brothers had to leave the region. Hidimba was left to fend for herself and her son in the forest. Although alone and deprived, she had no complaints against Bhima, and single-handedly brought up her son, who grew up to be a strong warrior like his father.

Although this might sound absurd, there was something arresting about the forest, I felt someone’s presence—was it Hidimba Devi?

It is believed that during the later phase of her life, Hidimba would practise rigorous tapasya and she was eventually blessed with supernatural powers. She turned into a ‘Devi’ or a goddess and became the protector of the region. What made Hidimba different from other demonesses was her human nature. She wasn’t an evil force like her brother Hidimb; she was kind and helpful. Locals who looked up to her built a temple in her name. Today, Hidimba Devi is worshiped as a deity and her temple has become one of the most popular tourist attractions in Manali. However, it’s not just the story of the demoness turned Goddess that fascinated me, but also the unfathomable beauty of the temple which left me mesmerised. I have been to many shrines across the country and abodes of Devi, but this Pagoda-style architecture of an ancient Hindu temple was something unique and new. 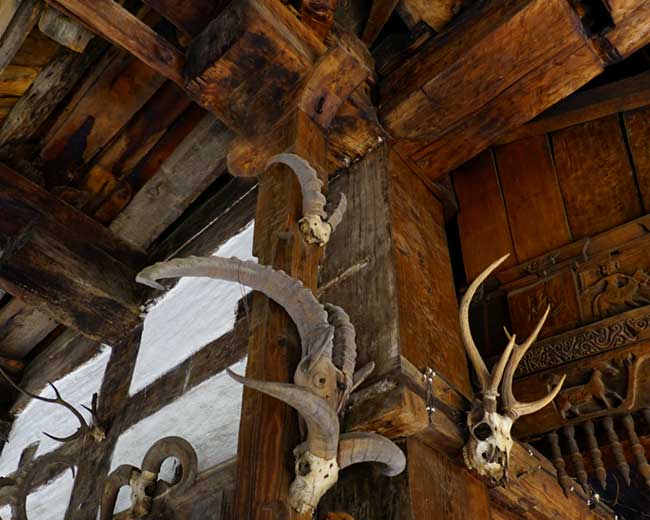 The wooden porch with spooky interiors featuring skeletons of horned-animals

I reached the temple during the closing hours of the evening, perhaps that’s why it looked a bit spooky and dark from a distance. But my notion changed as I stepped inside. The temple looked magnificent with those stunning, wooden carved interiors. It was constructed over a massive, sacred rock, which is a “manifestation of the earth goddess”. The design featured a three-tiered wooden roof and lower planks in the form of projecting canopies. There’s a certain old world charm about this beautiful temple. Its calm atmosphere can easily touch the depth of one’s soul, making it a perfect getaway for nature and peace lovers like me. The temple is tucked away into the lap of a thick pine forest, which is no less of a wonder to nature lovers. It was probably the best temple visit I made as I strolled around in the middle of the woods. It was dense, dark, chilling and enchanting—an absolute breath-taking experience. There was a soothing aura around this place, it calmed the soul and inspired a state of humility. Although this might sound absurd, there was something arresting about the forest, I felt someone’s presence—was it Hidimba Devi?

Well! Maybe it was just in my mind. But locals believe that Hidimba Devi still protects the forest and is still around like a guiding star for the people there. We travel to so many places, but only a few remain etched in our hearts—Hidimba Devi temple was one such destination. It made me rethink about my incomplete knowledge of the Mahabharata. But now, to me, Hidimba Devi is the unacknowledged heroine of Mahabharata. She is an example of a strong and devoted woman, who accepts her fate with dignity and brings up a warrior son singlehandedly with utmost humility and integrity.

Vietnam Diaries: Where the...

The mother-daughter bond is considered the strongest, most beautiful and sensitive of the parent-child bonds. Yet, no matter how close they are...Read More

A day at the haunted village...

I am a scaredy-cat. I have not watched any horror movie in my entire life. So, when my friends insisted that we visit the ghost...Read More

Discover your inner peace at...

Everything seemed to be falling apart those days—be it my career or my personal life. I wanted to run away to an unknown place, where...Read More