Home >> Travel Diaries  >> Vietnam Diaries: Where the mind is without fear

Vietnam Diaries: Where the mind is without fear

The mother-daughter bond is considered the strongest, most beautiful and sensitive of the parent-child bonds. Yet, no matter how close they are, every daughter, at some point in life, vehemently vows never to become like her mother. Our love-hate relationship is no different, but if there’s anything I’d like to be, it’s to be as bold and fearless as my mother.

She was turning 80. Living a life of extreme hardship with utter fearlessness, indomitable willpower, and selfless service, my mother deserved a grand celebration. Being a religious soul with a keen interest in history, she had always desired to visit Angkor Wat in Cambodia, but her debilitating leg muscles wouldn’t allow her to walk the vast expanse of the temple. So, we decided to visit Vietnam, a country with a blend of traditional and modern culture, history, and ethereal natural beauty. Keeping her comfort in mind, we limited the travel to parts of North Vietnam, starting with the capital city of Hanoi.

At first sight, Hanoi seemed uncannily familiar. Almost like home, back in Kolkata. The cantilever bridge that resembled Vidyasagar Setu in my hometown, the roads, the humidity in the air, and the overall unkempt look of the city—it was an overwhelming sense of déjà vu. It didn’t feel like I was in a different city, as Hanoi wrapped me in its warm embrace—like my mother does—and made me feel at home.

Despite the din and buzz of a typical modern city, there was something rustic about Hanoi. The street-side food stall owner, the flower woman on the cycle, the chattering children walking back from school, people travelling in rickshaws—all of them bore testimony to a simple life, and everyone sported a smile that exuded a sense of calm. The peaceful look on their faces wiped away my frowns. Is it that easy to be happy? This thought stayed with me the entire journey. 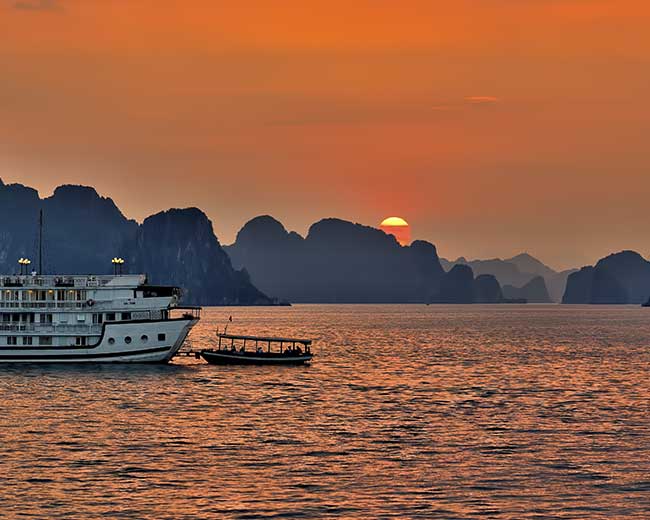 The next day, we went for an overnight cruise on Ha Long Bay, 165-kilometre east of Hanoi, and perhaps, the most picturesque part of Vietnam and our trip. More than 1600 small limestone islets and islands make up the natural beauty of Ha Long Bay, enticing travellers from all corners of the world. Mother, despite her aching legs, slowly, yet bravely, climbed the stairs to the deck. There we both sat in silent meditation, as the ship ambled past the tiny islands, while the great ball of fiery orange melted gently into the calm aquamarine. As I admired the majestic view, the gusty winds blew away every ounce of stress from my body and cast it off into the deepest part of the emerald waters, and the serenity of the ocean transcended all the noise within me.

The following morning, we woke up, refreshed and rejuvenated, ready to explore the beaches and caves along the bay. My mother decided to sit out this one, so it was just me and my cousin, who was also on this trip. Little did I know that we’d be put into one of the slim kayaks and told to fend for ourselves. Unenergetic, unfit, and fearful that I was, I wanted to back out. But, egged on by my cousin, I managed a few strokes before I felt utterly exhausted. That was, in fact, how I felt almost every day back home, after returning from work. But there, I had a family to cheer me up and lend me a helping hand. Here, I was in the middle of infinite vastness, with no one to steer the kayak in the direction we were asked to move in! My cousin was equally at sea. We could see the beach at a distance, but neither had the skill nor the energy to get there. On one hand was the fear of being left in the lurch, on the other was the overwhelming sense of failure.

Yet, we refused to give up. I closed my eyes and thought of my mother. Despite her niggling health issues, she had the willpower to come to the trip, hop, skip and jump from one boat to another—for which even I was a tad scared—climb steep stairs and enjoy every moment. I knew she wouldn’t like to see me give up midway. Even the people of Vietnam, after generations of war and trauma, never gave up their fight to live on. How could I accept defeat? After several bouts of starts and stops, we finally managed to steer our kayak to the most beautiful beach. In the crystal clear water, we could see the reflection of our relieved and satisfied faces. We had undertaken a journey into the unknown, on a kayak we didn’t know how to navigate. So the pleasure of achievement on reaching the destination far exceeded the pain of our travails. 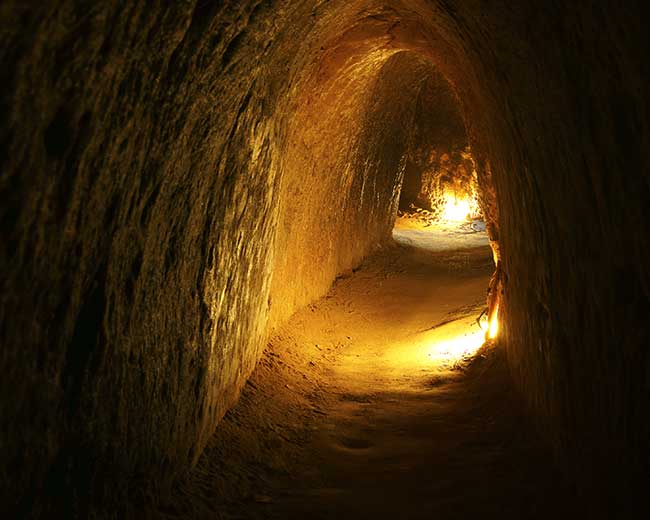 In the next leg of our journey, I was far more confident and ready for more exploits on land as well as on water, just like the local people. In Ho Chi Minh city, I bravely crawled through a part of the narrow, claustrophobic Cu Chi tunnels, built during the Vietnam war. The network of tunnels formed a veritable underground village replete with a hospital, dining room, kitchen, and workroom. The 200-kilometre long tunnels were so meticulously built that the Americans could never capture the Viet Cong based there, despite their strenuous efforts.

Once we were out of the tunnels, I felt a tremendous sense of achievement as not only had I powered through my claustrophobia but also successfully put aside my fear of the unknown. The experience on the Ha Long Bay and the crawl through the tunnels made me internalise what my mother always says: “Fear is all in the mind. You have to face it to win over it.”

The Vietnam trip will remain the most memorable holiday with my mother. Besides it being visually and gastronomically fulfilling, it was spiritually uplifting as I learned how a small shift in our attitude can help us defeat our fears

The strange story of...

More than a decade has flown by but the memories of our visit to Manali, soon after my board exams, are still fresh in my...Read More

“May I join you on your vacation to Sri Lanka?” my best friend asked me out of the blue. Since we had travelled together before, I...Read More