With the pandemic confining us to our homes, most of us are depending on Netflix and social media for a distraction from the scary and uncertain life outside. But if you’re done binging and are tired of the endless scrolling on your phone, it is time to give reading books a chance.

When William Nicholson wrote, “We read to know we’re not alone,” he had no idea how relevant his words would be several decades later. Reading not only has the potential to uplift your spirits, but each page can transport you into a new world, painted by the imagination of an author. Bringing such fascinating tales to help you ease your anxiety and the lockdown stress, Soulveda shares 11 inspiring books that will help you find new perspectives and beauty in the chaos.

A Walk in The Woods by Bill Bryson

A travelogue is a journey we take with the author, on which we see the world in a new light. A Walk in the Woods is one such travelogue, in which the author Bill Bryson has returned to America after staying in Britain for 20 years. Bill, along with a friend Stephen Katz hitchhikes the 3,300-kilometer-long Appalachian Trail across America in an attempt to get re-acquitted with his country. If you are keen on history, like to travel and explore the local culture, hop on this fun and adventurous journey.

When the protagonist, Toru Watanabe, moves to Tokyo to recover from the shock of his best friend’s death, he meets Naoko—his friend’s ex. And thus begins a friendship that blossoms into something beautiful. But the demons of their common past never allow them to become one. As the story unfolds, Toru meets new people who add a fresh meaning to his life, but fate had other plans and surprises for him.

Norwegian Wood by Haruki Murakami is one of those rare gems in the world of fiction that compel a heart to melt and ache at the same time. It also highlights the seriousness of depression and how it can destroy relationships and even turn fatal if left unaddressed.

Buddha, Geoff, and Me by Edward Canfor-Dumas

Ed is a regular person whose problems and struggles in life are real and quite relatable. Whether it’s unfulfilling relationships, unemployment, or lack of motivation in life—Ed’s life is what we call a mid-life crisis. One day he meets Geoff, a beer-drinking Buddhist, and his life begins to change for good. But the road to happiness is not a straight path for Ed as he stumbles on every other corner. But each time he falls, Geoff’s Buddhist philosophy helps him get right back up.

The Unlikely Pilgrimage of Harold Fry by Rachel Joyce

A letter from Queenie Hennessey, a woman Harold Fry hasn’t seen in 20 years, shakes up his retired mundane life. In response to the letter, Harold decides to meet Queenie in person. Thus begins the 965-kilometer-long journey on foot from Kingsbridge to Berwick-upon-Tweed. Harold believes Queenie will live as long as he keeps walking. Along the way, he meets many interesting characters who shake some memories within him—memories and regrets he thought he had left far behind in life.

Ikigai: The Japanese Secret to a Long and Happy Life by Héctor García and Francesc Miralles

In times of distress, Ikigai is the one book that can liberate you from your stress and worries. Roughly translated as ‘a sense of purpose’ or ‘a reason to jump out of bed each morning’, Ikigai is the secret of the Japanese people to live a long, fulfilling life.

Taking cues from the lifestyle of the Okinawans, the book offers actionable points and strategic plans to enhance your happiness and health quotient. Other than focusing on physical and mental wellbeing, Ikigai will also help you understand your skills and discover your life’s purpose. 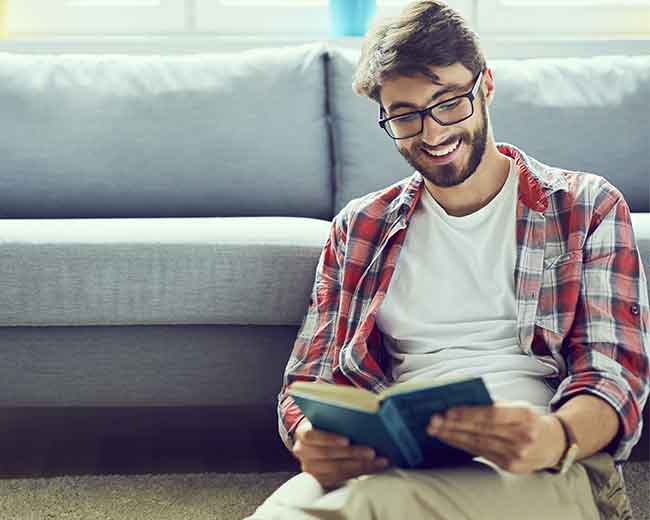 A refreshing read, this book offers hope to people who long for new beginnings in life.

For most Indians, Malgudi Days isn’t just another book; it is memories of their childhood wrapped in a gift box. A collection of short stories, Malgudi Days, set in the fictional town of Malgudi, explores the everyday problems of people. Each story different from the other explores different aspects of human behaviour. If you haven’t already read this book, now is the time to peek into the Indian culture and traditions, and celebrate the simplicity of life.

The Hitchhiker’s Guide to the Galaxy by Douglas Adams

Started as a radio show by Douglas Adams, The Hitchhiker’s Guide is Star Wars, Back to the Future, and Rick and Morty all wrapped into one rollercoaster ride. The book begins with the rescue of an Englishman named Arthur Dent by his alien friend, Ford Perfect, seconds before the Earth is doomed. What comes next is an adventure of a lifetime where two friends travel the far corners of the galaxy, meeting new beings and challenges. The uniqueness of this book lies in its humour, conversations, observations of human flaws, and the importance of mundane things in life.

Mister God, this is Anna by Fynn

The author, also the narrator of the story Fynn meets Anna when she was merely four years old. Anna is a curious child with a lot of questions. And to answer her curious and innocent questions on life, she has a special friend, God. Mister God, this is Anna is a simple story, with simple characters and writing. But its message is gold. Read this book if you also have an Anna in you who wants to unravel the mysteries of life.

Love in the time of Cholera by Gabriel Garcia Marquez

Set in the times of the cholera epidemic, this is a good book to read because of the hope it leaves us with. The classic love triangle spun by Gabriel Garcia Marquez makes you question if passion is better or normalcy; adventure is better or familiarity? The central character Fermina Daza, the widow of Dr Juvenal Urbino meets Florentino Ariza after 51 years, at her husband’s funeral. Florentino professes his undying love towards Fermina, leaving her shocked at his audacity. Society and its rules are seen as the limitation to a man’s emotions. A refreshing read, this book offers hope to people who long for new beginnings in life.

Spanning over several decades, Thousand Splendid Suns is the narrative of the indestructible friendship formed between two strong women, Mariam and Laila. Mariam, an illegitimate child, is married off to Rasheed after her mother’s death. And thus begins a life full of struggles and challenges. After being tortured by her merciless husband and the oppressive society for years; Mariam seeks her revenge and urges Laila, Rasheed’s second wife, to escape Afghanistan with their children, in search for a better life. Set during the reign of the Taliban, this outstanding story gives the reader the strength to fight adversities with renewed hope.

Tesla, SpaceX, and the Quest for a Fantastic Future of Elon Musk by Ashlee Vance

Nothing beats a biography that tells the story of an underdog, touching the skyline of success. Elon Musk’s biography is one such story of rags to riches where he, against all odds, finds unprecedented success despite all failures and setbacks.

After interviewing Musk for months, Vance brings to the world the story of the tech billionaire who is on a mission to make Mars our next home. This biography not only gives a glimpse but a close look into the life of Musk and his mind that never ceases to work.

When you see life from different perspectives and viewpoints, your understanding and perception of life changes. Your view of concepts such as...Read More

What I Talk About When I Talk...

Haruki Murakami and I have one thing in common. Both of us believe writing is an extremely difficult job. Sometimes it comes naturally, at other...Read More