All of a sudden, it struck me that we were climbing the Sigiriya rock. Upon this realisation, a surge of confidence rushed through my veins. 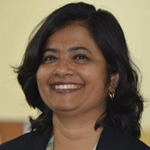 Priya is a naturalised Banglorean, a wordsmith, and a philosopher at large. She is a journalist by education, a dancer at heart and a multitasker by profession. Priya tries to draw from her myriad experiences to contribute meaningfully to Soulveda. You can be sure to strike up a conversation with her about anything from animals, books, cookery, dogs, football, parenting, shoes, and sarees to zorbing and Zumba.

Recently, I went on a holiday to Sri Lanka. While planning the getaway, I chose easily accessible, interesting places that even my 12-year-old daughter could enjoy. So it was a very ordinary itinerary that included some sightseeing, a little shopping and a whole lot of relaxing as it was, after all, a holiday. However, suggestions not to miss the must-see places kept pouring in from those who had visited Sri Lanka. One among them was Sigiriya, a UNESCO World Heritage Site. Considered one among the modern wonders of the world, Sigiriya sounded like a place we wouldn’t want to miss. My cousin, who was accompanying us on this trip, added it to the itinerary, as an after-thought.

While at the hotel, I did some research. Sigiriya was a huge rock, 200 metres high, in the shape of a sitting lion and you had to climb to its head to get a bird’s eye view of the entire island. Although I learned some fascinating things about Sigiriya, my mind was stuck on the rock’s height. Being the unfit, non-athletic person that I am, from that very moment, I decided I wouldn’t be able to scale it to the top.  At best, I’d climb a few steps and then wait somewhere, in case my travel companions wanted to continue the ascent.

We could see the rock from our hotel room and each time I saw it, it looked a little more majestic. But the day before our trek to Sigiriya, my daughter fell sick due to an ill-timed heat stroke. We decided to let her rest at the hotel, while we went to the rock fortress. When I reached the gates of the rock and paid for the tickets, I had no idea what I was going to do there. Suddenly, a man in his 60s, walked up to us asking if we needed a guide. After some hesitation and haggling, we agreed to hire him.

Sigiriya was carved into a fortress by the king of Sri Lanka, Kashyapa I around 475 CE

Before the ascent, Albert, now our guide, sat us down and recounted the captivating history of Sigiriya. Carved into a fortress by the king of Sri Lanka, Kashyapa I around 475 CE, Sigiriya was 1,202 steps to the top of the rock. Our guide gently led the way, enthralling us with interesting stories of kings, family feuds, picturesque gardens, swimming pools, and beautiful women. I didn’t even realise I had already begun climbing the steps, such was the charm of the stories we were listening to. It was only after reaching halfway that I felt a little weary and heavy in my legs. All of a sudden, it struck me that we were climbing the Sigiriya rock. Once this realisation dawned upon me, a surge of confidence rushed through my veins. I decided to go through with the rest of the climb to what seemed like the top of the world.

Climbing the ‘Stairway to Heaven’

Every time I felt tired, I told myself, I couldn’t abandon the uphill climb midway as I didn’t want to miss what lay at the end of the trek. I took inspiration from a Buddhist text I had read about a while ago. It gave out a profound life lesson. If you stopped almost at the finish line, how could you accomplish any goal? We took short breaks to drink water, but by then, I could sense an indomitable power to conquer Sigiriya. I was eager to reach the top. So I left the others behind and set my eyes on the summit, fervently motivating myself under my breath till I reached the penultimate landing. There I saw people fainting, just 10 steps away from the summit. My cousin, who was a regular trekker, was also panting and puffing as she sat down almost on the verge of giving up. But there I was, not feeling any fatigue. Instead, I was full of energy and eagerness to complete the last mile. All I could think was keep moving forward, you can’t give up now.

The breathtaking view from the top of Sigiriya

After a short rest, we climbed the remaining few steps and reached what to me seemed like the top of the world. I had done it! The entire 1,202 steps in less than two hours. Words fall short to describe the joy, and the sense of accomplishment I truly experienced. Indeed, there was an adrenalin rush in me to keep moving forward until I reached the summit. All that pep talk to myself along the way helped boost my confidence and encouraged me not to give up mid-way. Once I reached the top, momentarily, I felt I could conquer any obstacle from here on. No challenge seemed insurmountable to me. Albert, our sincere guide, and my cousin came along moments later.

The climb to Sigiriya seamlessly turned into a life lesson, as if glowing like a neon sign. It read: All that you need to achieve an impossible goal is perseverance and self-belief.

Gulmarg: The white wonder land I will never forget