People need qualities such as non-violence and compassion if they want to live happily together.

By The 14th Dalai Lama 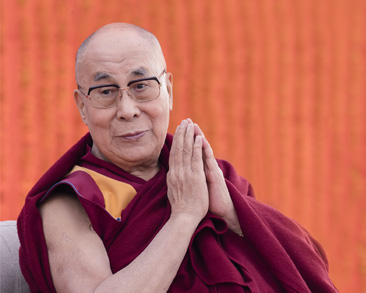 His Holiness the 14th Dalai Lama, Tenzin Gyatso, describes himself as a simple Buddhist monk. Born on 6th July 1935, he is the spiritual leader of Tibet.

Since taking asylum in India in 1959, His Holiness has become a global advocator of peace, compassion and happiness. In 1989, the Dalai Lama was awarded the Nobel Peace Prize for his non-violence and peaceful approaches to help the people of Tibet. He also became the first Nobel Laureate to be recognized for his concern for global environmental problems.

His Holiness has travelled to more than 67 countries spanning 6 continents. He has received over 150 awards in recognition of his message of peace, non-violence, inter-religious understanding, universal responsibility and compassion. He has also authored or co-authored more than 110 books.

Since the mid-1980s, His Holiness has engaged in a dialogue with modern scientists, mainly in the fields of psychology, neurobiology, quantum physics and cosmology. This has led to a historic collaboration between Buddhist monks and world-renowned scientists in trying to help people achieve peace of mind.

On the 140th anniversary of the founding of The Tribune, I am glad to have this opportunity to share some of my thoughts with your readers. I am pleased to learn that the newspaper was established because its founder understood the importance of educating the Indian community and saw the role that education could play in sustaining a sense of national identity when India was under British rule.

I generally say that the media plays an important part in ensuring that people can see every development in society from a broader perspective. I have even jokingly said on the occasion that those in the media should have long noses like elephants so that they can smell, and then expose, both the good and the bad.

Yet, while doing its job, the media should always be honest and fair, and remain unbiased in its news reporting. The fact that this newspaper has been in existence since 1881 is an indication that it is making a valuable contribution to society.

As the longest staying guest of India, I have been able to observe developments in this country quite closely. It is admirable that India has, in general, been able to maintain its robust democratic stability since its independence.

It is also wonderful that the country, despite many challenges, is growing at a rapid rate. There is, however, one area in which I would like, if I may, to offer some encouragement. That is in reviving interest in India’s ancient wisdom, especially in relation to such principles as ahimsa and karuna, non-violence and compassion. If we can develop such values, we can make a tremendous contribution not just to India but also to the entire world.

Over 61 years ago, I had to leave my homeland of Tibet to seek shelter and freedom in India. Since then, I have had the chance to interact with religious leaders, scholars and scientists from around the world. As I have a strong personal interest in quantum physics, I have particularly enjoyed my discussions with scientists in that field, including India’s own Dr Raja Ramanna.

It was he who once explained to me that though quantum physics is comparatively new in the West, the science behind it corresponds closely to what Indian Buddhist master Nagarjuna was writing about centuries ago. Even in the modern world, ancient wisdom has much to offer.

After Buddhism came to Tibet in the seventh century, we were able to preserve it even while it was declining in India. The religious aspects of Buddhism may be of relevance only to Buddhists, but I really feel that Buddhists science-including the science of mind-and Buddhist culture (based around compassion and non-violence) can be of great importance to the whole world, and even to those who do not practise Buddhism or follow any religion.

When we arrived here in 1959, the Indian government generously provided us with the space in which to train Tibetan students of all ages, and also several thousand Tibetan monks. Through them, we have kept alive what is essentially ancient Indian wisdom and continued a tradition that is more than a thousand years old.

We Tibetans—and I personally—are profoundly grateful to India for not only coming to our aid during our current crisis but also for providing us with spiritual knowledge that has benefited our people greatly over several centuries. I am convinced that the rich ancient Indian understanding of the workings of the mind and emotions, as well as Indian techniques of mental training, such as meditation, are of great relevance to today’s world.

To share and sustain this great Indian tradition is my essential commitment, along with the promotion of human values, the promotion of religious harmony and the preservation of Tibetan culture.

Today, I invite my Indian brothers and sisters to join me in this effort. Since India has a long history of logic and reasoning, I am confident that its ancient knowledge, viewed from a secular perspective, can be combined with modern education. India is, in fact, unusually well-placed to promote this combination of ancient and modern forms of knowledge so that a more integrated and ethically grounded way of being in the world can be cultivated in the twenty-first century. In essence, there is a need for education of the brain as well as for the development of warm-heartedness.

People need such qualities as non-violence and compassion if they are to live happily together. These principles not only make logical sense but are also of immediate practical benefit, whether you are a religious person or not. I have no doubt that if people paid more attention to compassion and non-violence in their day-to-day lives, the world would be a better place.

Just as many of us work to protect our physical hygiene, I believe we need to cultivate emotional hygiene. We must learn how to deal with anger, anxiety and fear and reduce them all. The key is learning how to cultivate peace of mind.

Ultimately, the source of peace and happiness is warm-heartedness. That is something within us. We cannot buy it or find it in a machine. We have to cultivate it inside ourselves. We must combine our intelligence with warm-heartedness. In that way, we can find happiness, for ourselves and for those around us.

I truly believe that India is the only country that can combine modern education with the ancient Indian understanding of the workings of the mind, and that the whole world urgently needs this. If we all work together, we can make a fresh Indian contribution to the welfare of the entire planet.

His Holiness the 14th Dalai Lama, Tenzin Gyatso is the spiritual leader of Tibet. Since taking asylum in India in 1959, His Holiness has become a global advocator of peace, compassion and happiness. He is the first Nobel Laureate to be recognised for his concern for global environmental problems.